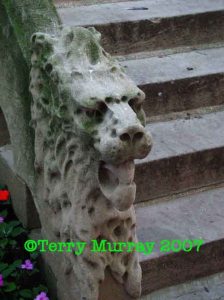 I came home from a conference in Chicago in late September with two 1GB memory cards full of pictures—pictures from the conference as well as the gargoyles and other architectural critters I found. Somewhere between my study and a friend’s car, waiting at the curb, I lost one of the cards. Sugar and I retraced my steps three times, and he took the back seat out of the car twice—but still no card. Until yesterday… when I found the bloody thing in the magazine basket in my living room. It must have flipped out of my hand or pocket somehow as I was walking out, and landed neatly in the magazine rack that I never use and noticed only because I bent down to pick up one of the cat’s toys which had come to rest in front of it.
Either that or the cat gently dropped it in the magazine rack after batting it around the apartment for the last six weeks. 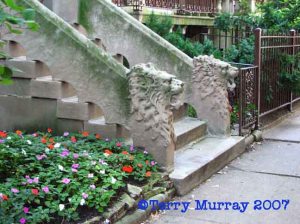 The headshot files on the card were no good to me now, seeing as I’d already written the stories that they would have illustrated. But I was glad to be reunited with my architecture pictures.
Such are the hazards of miniaturization—or having a jealous cat.

One thought on “Small world”