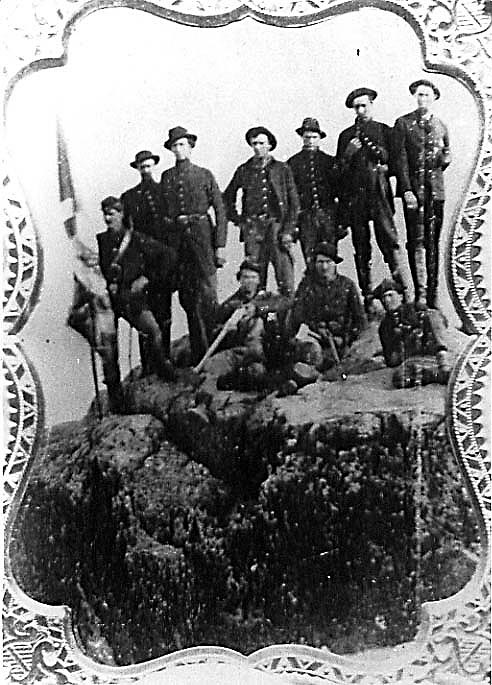 Today is Remembrance Day (or Veterans Day for you American readers), which was begun after the First World War. So, in a departure from gargoyles and architecture, I’d like to write today about my great-great-grandfather Adolph Redick, who fought on the Union side in the U.S. Civil War.

He didn’t die in a Civil War battle, but a battle of another sort, the story of which has been pieced together by the joint efforts of my sister the genealogist and me.

Adolph Redick was born in Posen (then in Prussia) in 1827. A stonemason (I guess this is related to the usual theme of this blog!), he emigrated with his wife Christina to Chicago sometime around 1860.

In 1864, Adolph’s friend John Stubenbeck encouraged him to enlist in the 51st Illinois Volunteer Infantry, Company K. (That’s a picture of some of the men of the 51st Illinois, Company K, at Lookout Mountain near Chattanooga, Tennessee, above. I checked with an archivist at the United States Army Military History Institute in Carlisle, Pennsylvania, which holds the photo, but was told that none of the men is identified in the picture. So I just imagine that GGGrandfather Adolph is among them.)

During the Battle of Franklin (Tennessee), which has been described as “second only to Gettysburg in importance during the entire war,” he was clocked in the head with the barrel of a Confederate rifle:

“While making a charge on the enemy we were attacked by some infantry hidden behind a rail fence. Redieck (sic) received a blow on his head with the barrel end of a gun which stunned him and he dropped. I, being a neighbor of his at home and had induced him to enlist, I assisted him as much as I could and looked for him to be placed in an ambulance. A week or so later he performed his duty again,” Stubenbeck said in support of Adolph’s disability application (“Proof of Incurrence of Disability”) more than 20 years later.

According to the “Declaration for Original Invalid Pension” completed in 1885, Adolph also contracted malaria while on duty in New Orleans in 1865, resulting in “dropsy and general debility.” He was treated at regimental headquarters up to the time of his discharge, and “ever since then.” 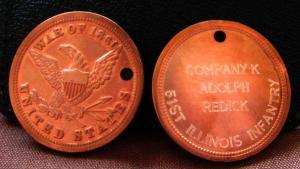 (Adolph entered the 51st Illinois as a private, and mustered out as a corporal at the end of the war in 1865. Above is a photo of a replica of his dogtag.)

Once home, Christina reported that he grew increasingly “irascible,” according to my conversation with a cousin, Adolph’s great-granddaughter. Christina ultimately had him committed to the Cook County Insane Asylum at Dunning in 1886, where he died of a hemorrhage three years later.

In his statement, Stubenbeck also said, “I believe the blow (from the Confederate rifle) was what made him insane and caused his death.”

A “Claimant’s Affidavit,” completed (with assistance) by Christina on 15 November 1898, tells the story of his commitment to Dunning: “My husband was sick on bed until the last eight months of his life. He was complaining ever since he returned home from the war of sickness, mostly about his severe headache. His only brother who died two years ago living in close neighborhood took him often to doctors, dispensaries, etc. The only doctor I had to go along was the County Physician Dr. Bluthardt who send him to the Insane Asylum in 1886. He died in 1889 there. It was my brother in law who attended to my pension claim in 1890. I cannot speak English whatsoever so I left everything to him.”

According to Dunning records, he was buried in the asylum’s cemetery.

Dunning, like many similar institutions of the time, was a scary and shameful place to be associated with. In his book Challenging Chicago. Coping with Everyday Life, 1837-1920, Perry Duis (a history professor at the University of Illinois at Chicago), wrote:

“For many generations of Chicago children, bad behavior came to a halt with a stern warning: ‘Be careful, or you’re going to Dunning.’ The prospect sent shivers down the spines of youngsters, who regarded it as the most dread place imaginable… Dunning … evoked images of gloomy institution walls, the cries of the insane, and the hopeless poor peering from its window.”

Adolph’s reward for winding up in Dunning? His son changed the family name from Redick to Richard.

But there was another indignity to come. Dunning officially closed on 30 June 1912, and reopened the next day as Chicago State Hospital. It later became the Chicago-Read Mental Health Center. The asylum’s graveyard was forgotten until excavation for a commercial-residential project on the site was begun in the late 1980s. The crews working on the site found skeletal remains and a mummified corpse, and a “cemetery genealogist” (according to a Chicago Tribune story) estimated the cemetery that stood there contained 38,000 bodies. It was determined that it had been the public burial ground for the indigent and mentally ill from nearby poorhouse-insane asylum complex. Owing largely to the efforts of Rev. William Brauer, the remains were transferred to five acres of state-owned property nearby and made into “Read-Dunning Memorial Park.” It features eight markers indicating the groups who are buried there, including “insane asylum,” “orphaned/abandoned children,” and unclaimed corpses from the Great Chicago Fire.

Jurisdiction of the park – and hence, responsibility for maintaining it – has been in dispute, but the cause of preserving it has been taken up by a local group. On the day I visited in September, the lawn was freshly cut.

3 thoughts on “A Civil War remembrance”