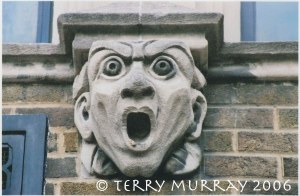 I recently discovered the website of The Decorated School Research network, a largely European group whose focus is sculptures and murals in and on 20th Century schools, and the relationships between architects, artists and educators through that art.

“We are interested in understanding more about how the art came to be commissioned, how the subject matter was decided, what was its function, its life story and what ideas about education or childhood, if any, were intended to be conveyed,” according to the website.

The network, which seems to have begun last year, has a two-year plan including seminars, a final international conference and a book, motivated by the fear that “many of these [artworks] may be in danger as school buildings are becoming replaced often with scant regard to the treasures that they contain.”

Having found this group (which I’ve included in my list of links, to the right), I thought I’d revisit some of the schools I included in Faces on Places: A Grotesque Tour of Toronto (my 2006 book on Toronto’s architectural sculpture) as well as to bring out pictures of school sculptures in Toronto and elsewhere that I haven’t included here before. 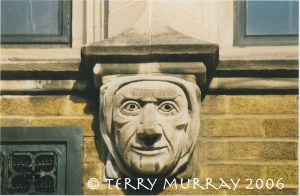 Northern Secondary School, whose architect was C.E.C. Dyson, the Toronto District School Board’s own architect, was built in record time in 1930. When I went to shoot the dozen masks all around building in the summer of 2005, a janitor leaned out a window and called to me, “You taking pictures of the funny people?” 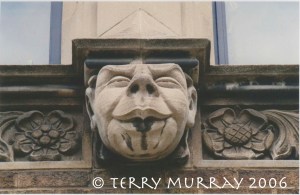 “Funny people” they are indeed—and some are contented, goofy, frightened, frightening, or sad — but there is no information on the Oxford-like faces to be found in architectural journals, at the school itself, or in the Toronto District School Board Archives. (In fact, the archive does not even have a file on Dyson, who was the board’s architect from 1921 to 1949.)

I appealed for information — even pet names that students, faculty, or staff may have had for their stone classmates — on the website for Northern’s 75th anniversary in that year. I heard from several of the original graduates, who had a wealth of information on the history of the school, but nothing specifically about the faces.

Then I heard from Amir Fatemi, a more recent graduate. “When I attended Northern between 1993 and ’98, my friends and I played a lot of handball outside the south doors,” he said. “We frequently referred to the gargoyles as the ‘Handball Gods’ since they could oversee everything.”

There is also a wealth of sculpture inside the school (which is known for its art programmes, among other things), and I was recently told by the parent of a Northern alum that the students paint murals on the lockers in the corridors. 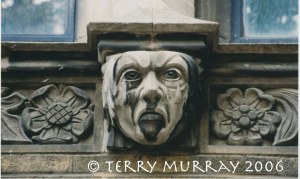 4 thoughts on “The “Handball Gods” of Northern Secondary School, Toronto”