My previous two posts (here and here) dealt with sculptures on the Physics and Astronomy Building at Western University (UWO) in London, Ont. To wind up my coverage of that wonderful building, I thought I’d just post a few of my favourite faces.

The first is Tecumseh, the Shawnee Indian who was an ally of the British during the War of 1812. Notably, he joined British Major-General Sir Isaac Brock in the Siege of Detroit, forcing the city’s surrender in August 1812.

Then there’s this fellow, identified by Don Moorcroft, emeritus professor of physics at UWO, who photographed and identified most of the figures on the building, as “boy with toothache,” who he said was modelled after a magazine advertisement for toothpaste. But I think he’s actually the same boy as the one in the ads for Dent’s Toothache Gum. Note the tears in the ad below and the sculpture above.

Finally, Prof. Moorcroft didn’t identify this cowled fellow, but I’m partial to him:

In my next post, I’ll wrap up my very brief trip to London, Ont., with the faces on St. Peter’s Cathedral Basilica. 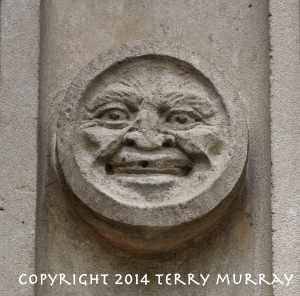 In addition to failing to mark either of the anniversaries of the start of the First World War, I missed the 45th anniversary of the moon landing.

So, better late than never, I am noting it here with a picture of a sculpture of the moon on the Physics and Astronomy building at Western University (UWO) in London, Ont.

It’s one of 23 small sculptures surrounding the east entrance of the building. It — along with Old Bill (see previous post) and the other faces there — was identified by Don Moorcroft, emeritus professor of physics at UWO, who photographed and identified most of the figures on that building.

The moon has a companion sun at the west entrance. Prof. Moorcroft explains its presence there by citing a 1924 London Free Press story which reported the stone mason Dan Cree “was surprised one morning by a workman as he was carving the face of a summer sun. ‘What on earth are you putting the face of the sun there for?’ he was asked. ‘Oh, it’s a bit dull this morning,’ was the reply, ‘and I thought I might coax the sun out to see his picture.’ ”

I’m particularly fond of the exquisite sculptures of a Canadian maple leaf and a bunch of grapes:

Here, I’m starting now, with this sculpture of the British WWI cartoon figure “Old Bill.” He appears on the Physics and Astronomy Building at Western University (UWO — because it used to be called the University of Western Ontario) in London, Ontario.

“Old Bill,” described as “the blob-nosed walrus-moustached old soldier” who appeared in cartoons from the front by Captain Bruce Bairnsfather (1887-1959) from 1915.

With the outbreak of war, Bairnsfather was deployed with the Royal Warwickshire Regiment and went to the Western Front to help relieve the manpower shortage experienced by the British in Flanders. He was sent home to Britain in 1915, suffering from the effects of a chlorine gas attack, a shell explosion and shell shock.

He had been cartooning while at the front, and in 1916, he was transferred to the Intelligence Department of the War Office, and officially appointed “Officer Cartoonist,” and toured the French, Italian and American armies in that capacity.

It’s not clear why he appeared on the UWO building, but the building’s construction history contains a clue. According to an article in a March 2010 issue of Western News, the first buildings on campus were University College and the Natural Science building (which is now the Physics and Astronomy building).

John Putherbough, builder of the Natural Science building (which was completed in 1924), was in a friendly competition with the building of University College to see who could do the best job, the article quotes Alan Noon, a freelance researcher with the university’s public affairs department. Putherbough hired stone mason Dan Cree of Hamilton, Ont., who asked if he could put some “interesting designs” on the building “to give it some colour and movement,” Noon said.

“From that enthusiasm came more than 30 one-of-a-kind sculptures, which Cree carved on the spot,” the article said, with Noon adding, “That’s what makes them so special, there were no moulds whatsoever.”